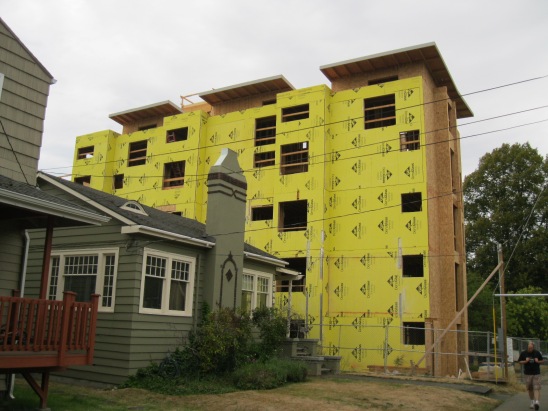 Coming to your neighborhood soon.

Pointing fingers and by inference accusing nearly 310,000 Seattle residents who live in single-family homes of racist intent when they speak up for their communities–and doing so without evidence—may be as egregious and polarizing a statement as any made by a locally elected official in our decades of neighborhood and housing activism. Developers and their self-appointed “urbanist” surrogates seemingly will go to any length to marginalize those standing in the way of their pro-density agenda. But it’s especially disappointing that two city councilmembers would play that game.

There is a tragic irony here in that 28 percent of the city’s renter population lives in a single-family home. About 63 percent of households of color in Seattle rely on rental housing compared to about 47 percent of white households. Moreover, a disproportionate number of larger renter families of color are by city standards severely cost burdened, including extended immigrant families. It’s this group that especially relies on these larger single-family rentals to maintain a foothold in their communities. 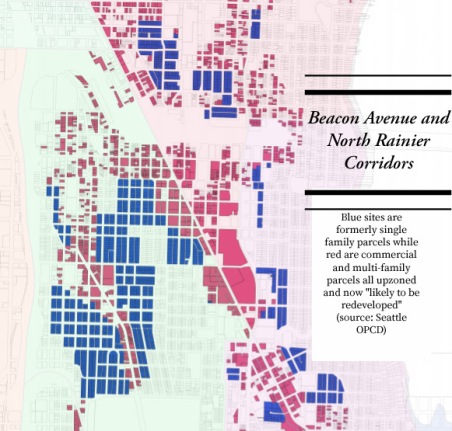 As we reported in a story three weeks ago, 60 percent of single family areas city-wide that were recently upzoned under the new MHA plan are located in the Central District and Southend, especially along corridors such as Rainier Avenue, Martin Luther King Way and 23rd Avenue. These are precisely the areas with the city’s highest concentrations of low-income and minority renters, particularly large families renting single-family homes. It’s these areas that will face perhaps the most drastic change resulting from MHA upzones setting in motion redevelopment and demolition driving many minority households out for smaller luxury townhomes and apartments.

The MHA upzones also will set off more buying and selling and refinancing of properties. If an affordable rental property isn’t immediately demolished, speculators pass on refinancing costs to the renters in the form of $200, $300, or even larger rent increases. Over time upzoning also will lead to increased land values and higher taxes, which inevitably get passed on to tenants in the form of higher rents. Once again, it will be low-income renters, especially families of color, who will be most directly impacted,and gentrified out of their neighborhoods.

Elderly homeowners, especially those of color, also will be hard hit by increased speculation, and higher property values and taxes. Since the 60’s, these pressures have forced lower-income black households to sell and generally it’s been white higher-income households stepping in to buy those homes. This is a major reason why the Central District fell from 70 to 20 percent African-American.  And when older residents and organizations representing these communities voiced this specific concern about the MHA upzones, Mosqueda, Gonzalez, and most of the other councilmembers ignored them.

The term ‘redlining’ was created in the 70’s to describe the denial of home purchase loans, or offering them at much higher than normal terms, to black families. Today, the pseudo-urbanists misuse the term, accusing anyone of redlining who stands in the way of their pro-density policies, especially homeowners seeking to preserve the affordability of their neighborhoods.

Ironically the leaders of the fight against redlining back in the 70’s were nearly all single-family homeowners – from the Central Seattle Community Council Federation with its black leadership, supported by black clergy. They released a ground-breaking report, painted red lines around their communities, and marched in protest to the banks. John ought to know. He was the group’s research coordinator at the time.

And sadly, our elected leaders have resisted grassroots attempts over the decades to either stem runaway growth that’s causing displacement or impose requirements on developers to replace at comparable price the existing low-income housing they remove. Instead, as was just done with the MHA upzones, they’ve chosen repeatedly to pour fuel on the fire – with upzones and tax breaks to encourage still more market-rate displacement-inducing redevelopment.

The most important lesson from our city’s legacy of racism really is about elites manipulating public policy that, either by design or effect, deepen the divide between rich and poor, white and people of color. A hundred years ago, one form of racist housing practices was the abuse of zoning and imposition of a covenant system to shut out blacks. In the 60’s and 70’s, another form was redlining.

Now it’s morphed into what we’re seeing today–the shameless active promotion of policies by our elected leaders that advance runaway growth–upzones and supply-side policies that benefit developers, giving them millions in tax breaks, and misdirecting a disproportionate share of city dollars towards downtown and South Lake Union. And other indirect subsidies that promote growth despite the massive displacement and gentrification it causes, disproportionately affecting people of color.

So there’s a tragic sense of irony when we listen to the words of Mosquenda and Gonzalez citing a “legacy of racist zoning” and leveling accusations against anyone standing in their way.