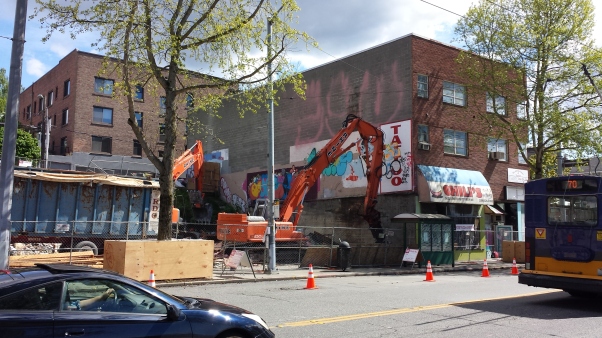 Originally scheduled for next week’s City Council Land Use Committee Meeting, April 17th, a discussion among committee members with opportunities for comment on CM Herbold’s anti-displacement bill has been postponed.  A later date when it will be taken up has not yet been set.

Councilmember Herbold’s bill would require developers to replace low income housing they demolish.  Specifically, it would substantially raise the mandatory housing requirement for developers who destroy existing low income rental housing.  The ordinance as currently written would apply only when developers demolish housing in particular areas of the city where there is a “high risk of displacement” as defined in a 2015 “Growth and Equity Report”, but advocates would like to see it apply to other areas of the city, if not all of Seattle.  As one advocate said recently, “someone displaced in Lake City or the University District or Ballard, or West Seattle is is just as displaced as those in the neighborhoods now covered by the ordinance.”

Advocates also are saying that the the developer’s replacement obligation must be increased in the bill to guarantee that at minimum, developers replace ‘1 for 1 and at comparable rent’, the units they destroy, not just a fraction.

When the City Council finally does get around to considering and voting on CM Herbold’s proposal – and it won’t be too soon say advocates – it could very well determine the fate of a large chunk of what remains of the city’s existing stock of naturally occurring low cost rental housing.   It also will determine whether the city, for the first time in decades, is willing to pass a law establishing the principle that developers must share in the cost of replacing existing low income housing they destroy.

In just three years, 2016-2018, developers tore down 2699 units of housing; most of it affordable naturally occurring rentals and applications are pending for removal of another 900 units.  Recent upzoning has greatly accelerated these losses. It means, say advocates, that “for every unit of taxpayer subsidized low income housing that the city adds to its inventory (about 500 per year are added at a cost of about $50 million) – developers will destroy about twice that amount to demolition alone.  It’s one step forward and two steps backward.”

More low cost units are being lost to speculative buying and selling of existing unsubidized apartments.  The new owners pass on refinancing costs to the tenants pushing up rents and low income tenants out – a trend also made worse by recent upzoning.  Upzoning over time also drives up property values and taxes – costs of which are passed on to the tenants forcing more low income people from their homes.

Advocates also point to data showing that areas most likely now to be redeveloped given recent city-wide “MHA upzones”, will be sites containing the highest concentrations of the city’s remaining low income rental stock and disproportionately affecting communities of color.

At a recent meeting of the city council, CM Mosqueda actually questioned the notion that developer induced displacement was even a problem, attributing gentrification to “other economic factors”.  Mosqueda then followed that up, sponsoring her own “lunch and learn” on displacement, carefully orchestrating it to preclude discussion of developer induced displacement.  How it’s possible to hold a hour-long discussion on displacement without delving into the role of zoning and development, the impact of higher rates of growth on housing demolitions and other developer actions that force people from their homes, is beyond me – but Mosqueda managed to accomplish it.  Herbold wasn’t even given time to describe her anti-displacement measure which she’d already introduced and also should have been front and center in the discussion.

Advocates say that passage of Herbold’s bill has become even more important now that the city has approved city-wide upzones affecting especially low income and minority communities. They are urging all their supporters to call and email all the councilmembers and then, when the hearing and committee meeting are set, “to attend, come early and sign-up to speak. Finally it’s our opportunity to lay out in general and very strong terms to the CM’s how displacement is affecting our communities because many CMs just don’t understand – to educate and strongly impress upon all how much demolition is ravaging our housing stock and that developers must pay their fair share.”

Here are numbers for all the councilmembers you are urged to call and/or email: